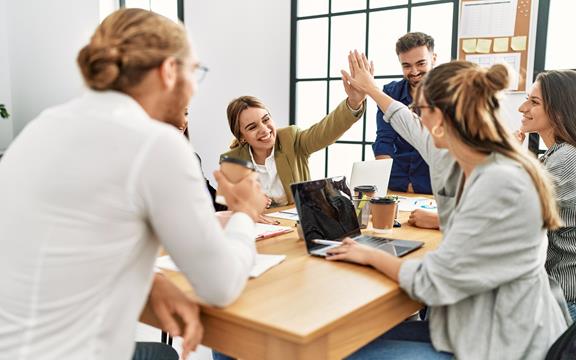 What Can Organisations do to Support their Workers

Hybrid and remote work are here to stay. As organisations start to implement this thinking into their planning they will, above other initiatives, need to rethink some of their previous methods of recognising and rewarding their employees to meet their current workplace. Rewards and recognition are an important part of any organisation’s relationship to their employees, across the certified Top Employers 85% of them have regular communications around their total rewards and 95% of Top Employers have a total rewards philosophy.

The pressure on quickly adapting these practices is further emphasised by the pressures of the great resignation being noticed in many markets across the globe. We touched on how this great resignation is affecting some organisations in a previous post. One of the ways to retain talent, is to recognise and reward them for their work.

While there are several established initiatives that businesses have previously used to recognise the efforts of their workforce, many of those need to be reworked for the hybrid and remote work environment as many of them are not as effective as they once were. We can see this more obviously with peer-to-peer recognition, which is used consistently in 66% of Top Employers, it has undergone several changes that reflect how the world of work itself has changed. Where these peer-to-peer recognition efforts would be displayed in person, nearly all of them now take place on a digital platform.

The communication channel between employees and the leaders in the organisation has always been important but it is further emphasised by the current work from home conditions. While this is an all-encompassing part of the business it is especially important when looking at how to structure the rewards and recognition programmes.

In the current work from home, hybrid, and remote working landscape the more that organisations open themselves up to the suggestions of their workforce. There is not one right way to approach these questions so if organisations not only ask their employees for their opinions but involve them in implementing their new initiatives and ideas.

Follow our Linkedin for more HR updates and news

Do Not Be Afraid to Try New Things

Having an open and ongoing conversation with employees about the reward and recognition programmes that are offered can open HR departments and business leader’s eyes to new initiatives that they had not considered previously. Without the physical restraints of the office limiting the creative process of implementing new initiatives leaders can consider things that previously would not have come to mind. While creative and unique approaches are not as evaluated as more calculates ones, they can lead to Innovations that would not have been possible if leaders were not actively accepting of trying new things.

Build and Communicate a Transparent Rewards and Recognition Programme

In the past few years many organisations have prioritised creating a transparent workplace where employees feel that they are informed of the many business and HR initiatives going on within the organisation. This cultural shift is also necessary to creating and communicating a successful rewards and programme.

The action of being transparent can easily be taken for granted and many organisations may write down their policies and believe that they have been properly communicated only for their employees to only have a brief recollection of this information being communicated to them. Organisations and, more specifically, HR leaders need to make a concerted effort for transparency in their reward systems. In many ways this is more important for remote and hybrid workforces as these employees are not in the office everyday or, in the case of some, very infrequently to establish and communicate a programme that is transparent and followed through by everyone involved.

Build a Culture of Recognition

A recognition culture does not happen accidentally, it needs to be a considered and practiced routinely by everyone in the company. Recognition is often focused on a once in a blue moon kind of event but with a robust and established recognition culture that allows for celebrations and rewards more frequently. Employees will appreciate that their leaders are seeing their everyday work in conjunction with the bigger milestones they are making in the organisation, which will lead to greater feelings of not only inclusion but also motivation.

A solid culture of recognition will also make it easier for leaders in the organisation to engage with their remote and hybrid employees because recognition will not take a backseat in their thinking but rather be a prominent part of working.

We are living in the new normal and we need to adapt to it rather than continually looking at the things that used toe work. While this is still a work in progress for many organisations, they can begin to make the necessary changes that will in the long term will be appreciated across the workforce.

We conduct in-depth assessments to discover the Top Employers in the world.